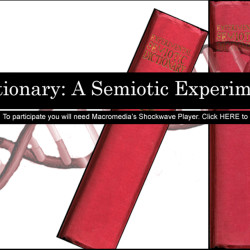 Language is a philosophical system that differs from culture to culture. Each language has words, grammars and constructs that are unique to the way people who use it think, analyze and classify the world. Dictionary: A Semiotic Experiment is an attempt to create an artificial language within an established virtual culture.

Dictionary re-visualizes the construct of language. This experiment looks at pictographic, standard and computer languages as a platform for analysis. The rigid structure of computer languages is adopted to create a formulaic grammar that is easily learned and described. The alphabet is constructed from a hybrid ideology from verbal and pictographic languages, where the alphabet visualizes the labial, velar and dental points of articulation for each pronounced sound. Dictionary utilizes user-created images as definitions. Opening the experiment to include an international audience magnifies the arbitrary, vague and elusive nature of language and its use. If each individual is allowed to create a word and visual definition from her own experience, the arbitrary and unique thinking patterns from cultures worldwide are forced to co-exist in an artificially unified space, where language as a dysfunctional concept becomes a hyper reality.