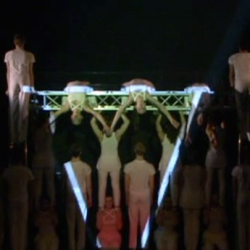 Spatial Dialogue investigates perceptions of space, such as the relationships between exterior and interior or public and private space. Creating in the intersection between new media, choreography and set design, the three collaborators were interested in an exploration of the impact of space on physicality and movement and its representation through technology.